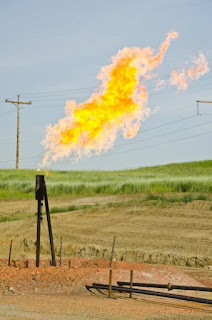 A study by the environmental group Friends of the Earth that focused on the oil and gas industry in North Dakota found that the "royalty-free flaring of natural gas from wells on public and tribal lands amounts to a hidden federal subsidy worth tens of millions of dollars," Phil McKenna reports for InsideClimate News. "But one of the biggest producers of oil in the state, Continental Resources, Inc., challenged the findings, suggesting that the research overstated the volumes of hydrocarbons being burned at wells." Jeff Hume, vice chairman of strategic growth initiatives, told McKenna, "They have obtained flare volume reports which are accurate, [but] what they don’t realize is the majority of gas that is reported as flared is inert gas, not hydrocarbons."

The study found that "over a six-year period, the U.S. Bureau of Land Management subsidized the burning of $524 million of natural gas by oil and gas companies operating on public and tribal lands in North Dakota," McKenna writes. "Federal regulations allow oil companies to flare gas without paying royalties if it is the only way they can economically extract oil from a well, Ross said. The companies in the North Dakota study flared 107 billion cubic feet of natural gas from 2007 to 2013, the study found. The carbon dioxide emissions from this were equal to the annual output of more than 1.3 million cars, according to the report. This royalty-free flaring resulted in a $66 million subsidy over the six years of the study for oil and gas companies in North Dakota, the report found."

Oklahoma City-based Continental Resources officials countered that "the study overstated the company’s share of flared methane or other hydrocarbons," McKenna writes. Of the 55 billion cubic feet of gas that Friends of the Earth reported as hydrocarbons flared by Continental Resources in North Dakota, Hume said "more than 53.4 of it, or more than 97 percent, was carbon dioxide or nitrogen from enhanced oil recovery operations outside the Bakken formation in Bowman and Slope counties." (Read more)
Written by Tim Mandell Posted at 10/05/2015 01:51:00 PM