The number of rural mortgage loans decreased 28 percent from 2013 to 2014, from more than 1.2 million to just over 900,000, Keith Wiley, senior research associate at the Housing Assistance Council, reports for the Daily Yonder. "Refinancing accounted for 99 percent of the decline both nationally and in rural areas. There were fewer than half as many rural refinance loans in 2014 compared to 2013 levels. The drop is partly attributable to recent interest rate increases, according to a Federal Reserve Bulletin. The decline in refinance loans also represents the first time since 2006 that home purchase originations represented a majority of loans (rural and nationally)."

"The number of loans for home purchases, in contrast, increased both nationally and in rural communities," he writes. Loan applications for home purchases grew by nearly 7 percent in 2014, "higher than the national increase in home purchases at 4 percent. Rural home purchase loan volume (440,489) still remains less than half of what it was before the Great Recession in 2006 (926,156)." (Housing Assistance Council map: Every state experienced declines in rural mortgage activity in 2014. The darker the blue the higher the decline. To view an interactive version, click here) 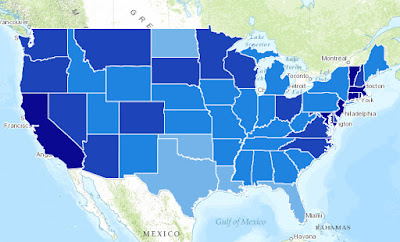