Safety risks for farmers increase as they get older, a cause for concern considering the average age of farmers keeps increasing, Jeffrey Meitrodt reports for the Minneapolis Star Tribune as part of its series "Tragic Harvest." A review of more than 200 farm death investigations in Minnesota showed that nearly half involved people 65 or older. 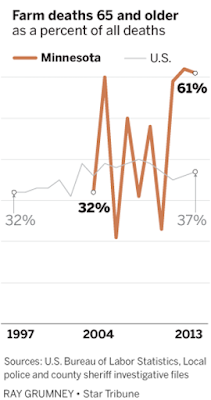 "Unlike the rest of the working world, where retirement at age 65 is typical and sometimes mandatory, most farmers keep working," Meitrodt writes. "Many die on the job because they gamble with their aging bodies once too often. Serious accidents are a concern for farmers of any age, but the risk only increases as they get older. Physical tasks become tougher than they used to be, and often it’s not easy—or even possible—to slow down." (Tribune graphic)

A 2009 study in the American Journal of Industrial Medicine found that "older farmers are more than twice as likely to die in an accident as younger workers, Meitrodt writes. "More than 1,800 farmers age 65 and older have died in work-related accidents in the past decade—or 38 percent of the U.S. total. And the farming community is aging with the rest of the population, suggesting that safety will become an even bigger issue. Nationally, the typical farmer was 58.3 years old in 2012, up from 50.5 in 1982. In Minnesota, where a quarter of principal farm operators are now 65 or older, the average age is 56.6."

"Researchers say older farmers often die in accidents that younger workers can survive," Meitrodt writes. "Older farmers are more likely to crack down on safety violations by others, especially their children, than to follow those rules themselves, according to a Star Tribune review of accident reports and interviews with surviving family members. But almost nothing is being done to raise awareness of the problem. Most safety campaigns focus on accidents involving children, who account for a tiny portion of farm deaths in the U.S." (Read more)
Written by Tim Mandell Posted at 10/06/2015 12:53:00 PM