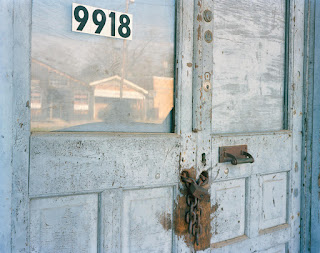 When the U.S. Postal Service announced in 2011 plans to close 3,653 rural post offices, "photographer Rachel Boillot initially saw parallels between the closures and what was happening in her own career," Diana Budds reports for Fast Company. "Just as the larger force of digitization has all but decimated the film industry, modern technology has slowly chipped away at the post office's relevance. For most of us, communication happens by phone or email, but for others it still happens the old-fashioned way, with a physical letter that travels many miles." (Boillot photo: Closed post office in Goodman, Miss.)

Boillot set out to capture rural post offices for her series, Post Script, Budds writes. Boillot told her, "The communities I visited were by and large elderly, remote and impoverished. I quickly learned it’s much more complicated when you consider the politics behind [the closures]. For example, why close rural post offices first if that's where the people need and value them most? The post office serves as town center in rural communities, often acting as a town’s sole address. That’s why zip codes are lost when a rural P.O. closes, and that became a crucial frame for the project."
Written by Tim Mandell Posted at 10/06/2015 12:52:00 PM