U.S. dietary guidelines that for years have recommended avoiding whole milk—leading to a decrease in sales—may have gotten it all wrong when it comes ingesting saturated fats, Peter Whoriskey reports for The Washington Post. Research in recent years has found that "millions might have been better off had they stuck with whole milk. Scientists who tallied diet and health records for several thousand patients over ten years found, for example, that contrary to the government advice, people who consumed more milk fat had lower incidence of heart disease."

"This year, as the 'Dietary Guidelines for Americans' undergoes one of its periodic updates, the federal bureaucrats writing them must confront what may be the most controversial and weighty question in all of nutrition: does the consumption of so-called saturated fats—the ones characteristic of meat and dairy products—contribute to heart disease?" Whoriskey writes. "After all the decades of research, it is possible that the key lesson on fats is two-fold. Cutting saturated fats from diets and replacing them with carbohydrates, as is often done, likely will not reduce heart disease risk. But cutting saturated fats and replacing them with unsaturated fats—the type of fats characteristic of fish, nuts and vegetable oils—might." (Post graphic) 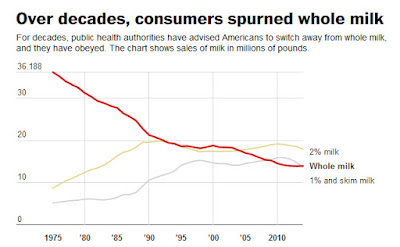 "This shift in understanding has led to accusations that the Dietary Guidelines harmed those people who for years avoided fats—as instructed—and loaded up excessively on the carbohydrates in foods such as breads, cookies and cakes that were marketed as 'low fat.'" Whoriskey writes. "It also has raised questions about the scientific foundations of the government’s diet advice: To what extent did the federal government and the diet scientists they relied upon, go wrong? When the evidence is incomplete on a dietary question, should the government refrain from making recommendations?"

Dariush Mozaffarian, a cardiologist, epidemiologist and dean of the Friedman School of Nutrition Science & Policy at Tufts University, told Whoriskey, "There's no evidence that the reduction of saturated fats should be a priority." Others disagree. Representatives of the American Heart Association said "the evidence for the dangers of saturated fats arises from these two ideas: Consuming saturated fats raises levels of so-called 'bad' cholesterol in the blood, and higher levels of 'bad' cholesterol, in turn, raise risks of heart disease."