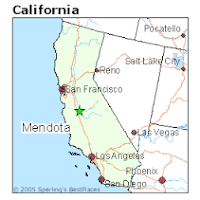 In rural agricultural towns like Mendota, Calif., (Best Places map) where there is not much to do when the work days ends, the sex industry thrives, and sexually transmitted diseases, especially among undocumented workers, are a cause for concern, Diana Aguilera reports for Valley Public Radio. Fresno County has one of the highest rates of STD’s in the state.

"Lack of access to health care, six-day work weeks and tough living conditions makes it hard for many farmworkers to visit a doctor," Aguilera writes. City councilmember Joseph Riofrio told Aguilera, “There’s a lot of unsafe sex because of people, you know, drinking, getting drunk, feeling lonely, far away from home. There’s people that come from Fresno or Merced. They’re looking for customers either at the motel across the street or the motel right here, and they’ll rent the room throughout the night.”

One problem is a lack of data on STD rates among migrant workers, Aguilera writes. George Lemp, who took part in a 2005 study by researchers from University of California-Berkeley and experts in Mexico, told Aguilera, “We found that there was a significant increase in risk behaviors after migration to the United States. Their risk of engaging in sex with sex workers went up about two and a half fold.” He said "farmworkers were also more likely to have sex while under the influence of drugs and alcohol after coming to the states. In addition, they were six times more likely to perform sex work for pay and 13 times more likely to have sex with men."

While local campaigns have sought to educate people and provide free condoms, undocumented worker Francisco told Aguilera, “If anyone has anything they don’t say it because they’re embarrassed. We’re very shy; we don’t talk about sex. I think its part of our culture, and that’s the reality.” (Read more)
Written by Tim Mandell Posted at 10/07/2015 10:00:00 AM