Protesters target McDonald's for use of potatoes treated with pesticides 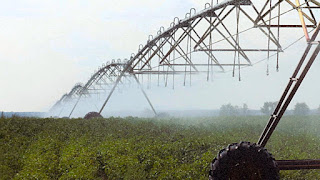 Minnesota-based Toxic Taters Coalition is leading a protest today at McDonald's restaurants against the use of potatoes treated with pesticides, Don Davis reports for The Forum of Fargo-Moorhead. The group, which will hand out organic potatoes at restaurants in seven states and Canada, planned the protest for today to coincide with the move by McDonald's to begin offering all-day breakfast. (MPR News photo by Don Gunderson: An irrigation rig watered potato plants near Park Rapids, Minn., last summer)

"Toxic Taters is made up of a group of people who live near potato fields that they feel are treated too heavily with pest-killing chemicals," Davis writes. "Also participating is the Pesticide Action Network North America. The groups will tell McDonald's customers interested in the subject that people who live near fields where potatoes are grown for McDonald's French fries and hash browns are exposed to pesticides that drift from fields. The pesticides, the organizations say, hurt people's health."

Offutt President Keith McGovern "said his company already tries to use the smallest amount of fertilizer, insecticide and fungicide in the most responsible ways," Enger writes. "The company uses drones, infrared cameras and a crew of scientists to improve efficiency. He said the company couldn't cut chemical use any faster, even if McDonald's executives asked. He told Enger, "We couldn't grow enough potatoes to feed a reasonable number of people without using crop protectants." (Read more)
Written by Tim Mandell Posted at 10/06/2015 12:52:00 PM