Nine residents in Old West Ranch—north of Los Angeles—living in non-permitted RVs, travel trailers and other structures that do not meet county standards have been told to "correct multiple violations of the Kern County Ordinance Code—or face the consequences," Steven Mayer reports for The Bakersfield Californian. (Best Places map: Old West Ranch is located just outside Tehachapi, Calif.)

Disabled musician Bert Bockover and his wife April, who have owned their 5-acre parcel near Tehachapi for some 20 years, say conforming to code could leave them destitute or homeless, Mayer writes. They have "no plumbing, no natural gas, and what electricity they use is generated by a modest solar array and a propane-powered refrigerator. They pay a monthly service for their plastic, portable outhouse. And they have a 2,500-gallon water tank donated by Grammy-based MusiCares, a nonprofit that provides assistance for music people in times of need."

For neighbors, who say the playing field is not level among residents who pay taxes and those who don't, the move is long overdue, Mayer writes. Robert and Donna Moran have "paid taxes to support local schools and fire protection. They paid fees to support maintenance of the roads on the ranch, which are private and not maintained by the county. And they paid the fees for permits to legally build on and develop their property." They are among at least five property owners to complain about neighbors, saying property values are being hurt and that the number of squatters and drug users has increased. 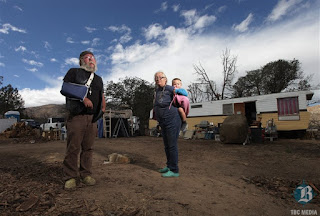 "The county’s code enforcement operates exclusively on complaint-generated cases, said Code Compliance Division Supervisor Al Rojas," Mayer writes. "First a letter goes out to the residents alleging that a violation exists on property for which they are the owner or responsible party. If the party does not respond or the violation is not corrected, the division inspects the propety and provides the resident with a 30-day notice to “abate” the violations." (Californian photo by Felix Adamo: The Bockovers)

In order to come into compliance, "the Bockovers have to either remove everything from the land and sell, an option they say would leave them homeless and eventually pennyless" or "establish a permitted structure on the property, drill a working water well and set up a sewage system," Mayer writes. So far they have broken apart and hauled off two travel trailers and removed three cars, earning them a deadline extension. Also, Self-Help Enterprises, a nonprofit housing and community development organization "is currently assessing the Bockovers’ eligibility for assistance. And if they are, in fact, deemed eligible, help could be on the way for a new manufactured home and financing for the drilling of a water well." (Read more)
Written by Tim Mandell Posted at 10/05/2015 01:50:00 PM