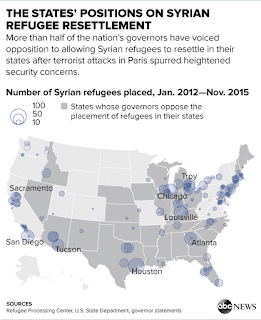 Refugees could be a remedy for rural towns struggling with population decline, Tim Henderson reports for Stateline. "Small towns and rural areas across the U.S. have been losing population since 2010, though the losses have shrunk to 4,000 a year in 2015 from an average of 33,000 a year earlier in the decade, according to a May report from the U.S. Department of Agriculture. But in many areas, refugees have helped to offset or reverse the losses." (ABC News map)

"About 70,000 refugees were resettled in the U.S. last year," Henerson writes. "Iraq and Burma were the largest sources of refugees, with a combined 31,000 people. About 1,700 were from Syria; the Obama administration announced last year it wants to ramp the number up to 10,000 this year."

Some small towns are welcoming refugees with open arms, Henderson writes. Mayors from towns such as Rutland, Vt., Central Falls, R.I, Clarkston, Ga., Haledon, N.J., Socorro, Tex., Clearfield City, Utah and the Illinois college towns of Normal and Urbana have been vocally in favor of allowing refugees into their communities. But not everyone agrees. The Rutland mayor has faced opposition and the mayor of Sandpoint, Idaho, backed off from a proposal to welcome Syrian refugees after local protests.

Refugees, though, have something to offer rural communities, said Eskinder Negash, senior vice president of the U.S. Committee for Refugees and Immigrants, a network of groups that help resettle refugees around the country, Henderson writes. He told Henderson, “Every time a refugee rents an apartment, every time a refugee shops for food, there’s some income coming in for the city and going into the tax base. There’s a new realization that refugees can be an economic engine for some of these small communities.” (Read more)
Written by Tim Mandell Posted at 8/10/2016 10:18:00 AM