The Daily Yonder has created a county-level map, using Centers for Disease Control and Prevention data, of increases in deaths from prescription drugs from 1999 to 2014. The map, based on the number of prescription-drug deaths per 100,000 residents, shows that many rural areas, especially Appalachia, the Southwest and the heavily Native American areas of Oklahoma, have the highest rates. The top four slots are held by West Virginia counties, led by Wyoming County, with a death rate of 54.6 per every 100,000 people. West Virginia has six of the top 11 counties, Kentucky three, and Virginia and Utah one each. 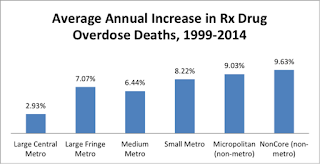 Rural or "NonCore" counties "saw an average increase in prescription drug deaths rates of about 9 percent per year from 1999 to 2014," Tim Marema reports for the Yonder. "Central counties of large metropolitan areas (1 million residents or more), on the other hand, saw the death rate climb by less than 3 percent per year on average over the same period."

"An analysis of CDC age-adjusted mortality data shows that, in general terms, the more rural a county, the greater the increase in its prescription drug-overdose death rate from 1999 to 2014," Marema writes. "The exception to the rule is counties on the fringes of the nation’s largest metropolitan counties—metros with 1 million residents or more. There, in the suburbs of large cities, the death-rate didn’t climb as fast compared to the overall trend."

The Department of Health and Human Services says that "prescription medication accounts for about half of all drug deaths in the U.S.," Marema writes. Agriculture Secretary Tom Vilsack, who has been holding town-hall meetings on the rural drug epidemic, said last month at a meeting in Missouri, "From 1993 until 2013, we have seen a 400 percent increase in opioid prescriptions. We now have over 259 million prescriptions being filled on an annual basis. That is one for virtually every adult in the United States of America.”
Written by Tim Mandell Posted at 8/09/2016 12:07:00 PM