Florida turtles painted, in another instance of lack of respect for wildlife, and ignorance about it 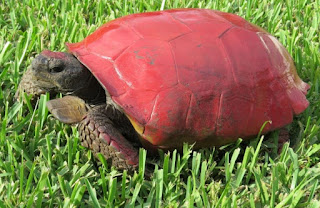 In another example of people showing a lack of respect for wildlife, turtles in Florida have turned up with painted shells, Amy Wang reports for The Washington Post. The Florida Fish and Wildlife Conservation Commission, which posted photos on Facebook of turtles that were painted, said the action cam be harmful to the animals, making them more visible to predators and “can hinder their ability to absorb vitamins they need from the sun, cause respiratory problems, allow toxic chemicals into the bloodstream and more."

The state agency said in a statement: "Tortoises and turtles don’t need touch-ups! You can paint your house, a piece of furniture, a canvas or even your own fingernails or toenails, but you should never paint the shells of turtles and gopher tortoises!”

Cases of ignorance about wildlife abound. In May, a baby bison at Yellowstone National Park had to be euthanized after tourists put it in their car, thinking it was cold. In February, an endangered baby dolphin in Argentina died after swimmers passed it around for selfies. There have also been reports of people getting dangerously close to bears for selfies and an instance in May where a two-foot long nurse shark in Florida had to be killed after swimmers taunted it, causing it to latch on to a woman's arm.
Written by Tim Mandell Posted at 8/10/2016 11:34:00 AM