Poor rural schools have improved under Obama, but more work still needs to be done

In 2007 then-Sen. Barack Obama said he was inspired by a 2005 documentary, Corridor of Shame, about the neglect of South Carolina's rural schools, to visit schools in poverty-stricken rural Dillon County, South Carolina (Wikipedia map). While there, Obama said improving education in poor areas would be one of his main priorities as president, Alan Richard reports for The Hechinger Report, which is funded in part by the Gates Foundation.

"Nine years later, as he approaches the end of his second term, educators and kids in Dillon County say President Obama made good on many of his promises," Richard writes. "Here, that came in the form of helping the town replace the decrepit J.V. Martin Middle School campus with an impressive new building. And his visits called more national and local attention to under-resourced, rural schools serving mostly minority populations." 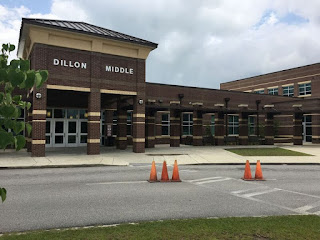 "But in other ways, the president came late to addressing what experts and locals say are the specific needs of poor rural communities like Dillon, where roughly two-thirds of students are African-American, one-third are white and 90 percent are low-income," Richard writes. "President Obama’s signature education policies such as Race to the Top and the expanded School Improvement Grant program to turn around low-performing schools didn’t always reach places like Dillon and Southern communities like it, however, where schools face the triple problems of poverty, a legacy of racial segregation and distance from jobs and resources that could help uplift the community." (Richard photo: A 1 percent sales tax and a $3 million grant from the Obama administration helped build a new middle school in Dillon.)

In Dillon the high school graduation rate over the past four years has soared from 57 percent to 91 percent, Richard writes. But only half of graduates go to college, compared with 70 percent statewide. The schools still face teacher shortages, with salaries about $7,000 lower in Dillon than in the state's more affluent communities. Students also say some equipment is outdated.

Overall, "the nation’s students who come from low-income families have made some progress under Obama’s watch," Richard writes. "Achievement gaps have narrowed somewhat for minority students, but the differences remain glaring: 72.5 percent of African-American males finish high school on time, even as the national graduation rates reached a record high of 82 percent in 2013-14 (the latest year available). The gap in graduation rates between black and white males grew to 21 percentage points in 2012-13, the Schott Foundation for Public Education found—although federal data show a narrowing gap. South Carolina graduated just 51 percent of black males that year."
Written by Tim Mandell Posted at 8/11/2016 12:32:00 PM