FDA e-cigarette regulations go into effect today, banning sales to anyone under 18 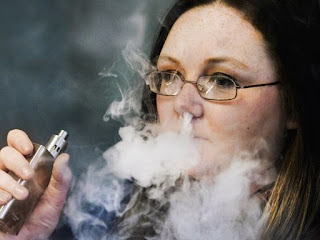 New Food and Drug Administration regulations for electronic cigarettes, which ban tobacco sales to anyone under 18, went into effect today, Aamer Madhani reports for USA Today. E-cigarette use among teens has been on the rise, especially in rural areas. "E-cigarette groups have already launched a legal battle to stop the FDA and warned that the vapor industry would go up in smoke if the regulations are fully implemented." (Associated Press photo)

"FDA will have to approve all e-cigarette products that have been available since February 2007. That means nearly every e-cigarette product on the market must go through an application process to deem whether it can continue to be sold," Madhani writes. "Manufacturers will be able to keep selling their products for up to two years while they submit a new production application, plus an additional year while the FDA reviews it."

"Vape shops cannot give free samples to customers or sell to people younger than 18, under the new regulations," Madhani writes. "Merchants will be required to ask for identification from customers who appear to be under the age of 27. And vending machine sales of e-cigarettes are prohibited unless the machines are in adult-only facilities. Also covered are premium, hand-rolled cigars, as well as hookah and pipe tobacco. Before the new regulations, there was no federal law prohibiting retailers from selling e-cigarettes, hookah tobacco or cigars to minors, though almost all states already prohibit such sales." (Read more)
Written by Tim Mandell Posted at 8/08/2016 10:48:00 AM