Industrial chemicals that pose risks to developmental, immune, metabolic and endocrine systems have been found in the drinking water of more than 6 million Americans, says a study by Harvard University researchers published Tuesday in Environmental Science & Technology Letters.

The study, which consisted of 36,000 Environmental Protection Agency samples taken in 2013-15, found that water was more at risk in areas with higher numbers of industrial sites that manufacture or use these compounds, military fire training areas, wastewater treatment plants and civilian airports with personnel trained in the use of aqueous film-forming foams. (Harvard graphic) 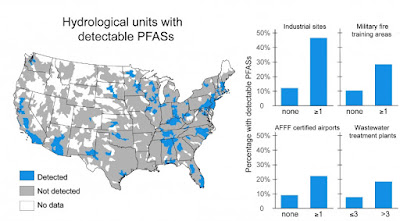 Researchers found that "194 of 4,864 water supplies across nearly three dozen states had detectable levels of the chemicals," Brady Dennis reports for The Washington Post. "Sixty-six of those water supplies, serving about six million people, had at least one sample that exceeded the EPA’s recommended safety limit of 70 parts per trillion for two types of chemicals — perfluorooctanesulfonic acid and perfluorooctanoic acid."

"The federal government does not currently regulate PFAS chemicals," Dennis writes. "But they are on the EPA’s list of 'unregulated contaminants'  that the agency monitors, with the goal of restricting those that most endanger public health. Partly because the rules that it must follow are complicated and contentious, officials have failed to successfully regulate any new contaminant in two decades."
Written by Tim Mandell Posted at 8/11/2016 12:31:00 PM