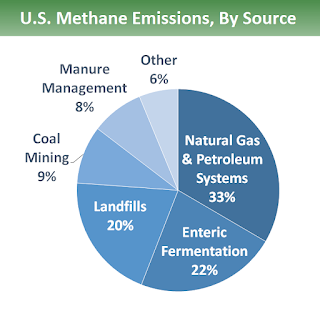 California dairy lobbyists say the state is over-regulating by trying to reduce enteric fermentation—methane that livestock produce as part of their digestion—in an effort to cut greenhouse-gas emissions, Jeremy White reports for The Sacramento Bee. The Environmental Protection Agency says enteric fermentation "represents almost one third of the emissions from the agriculture sector" and "manure management accounts for about 14 percent of the total greenhouse gas emissions from the agriculture sector." California has more dairy cows than any other state. (EPA graphic)

Enteric fermentation is more commonly known as gasiness, or "mostly belching," according to a California Air Resources Board (ARB) document, White writes. However, "'FLATULENCE' blared the subject line of an email sent out Tuesday as part of an effort by groups like the Western United Dairymen and the Milk Producers Council to beat back climate mandates. Featuring an image of a cow with a red target on its body, the email urges readers to 'say NO to unbridled ARB authority.'”

The smelly subject is part of the state's plan to curb climate-altering methane by "getting food waste out of landfills, where it releases gas as it decomposes," White writes. "ARB has also suggested slashing methane from cow manure and from enteric fermentation, a source of about half of the emissions from California’s 5.5 million beef and dairy cows."

Western United Dairymen has spent about $116,000 on lobbying since 2015. White writes. Anja Raudabaugh, CEO of the group, told him, “The focus here is to highlight ARB’s efforts at over-regulating the dairy industry. By nature’s design, [cows] pass lots of gas. Quite frankly, we want them to expel gas so they don’t explode.” (Read more)
Written by Tim Mandell Posted at 8/12/2016 10:49:00 AM