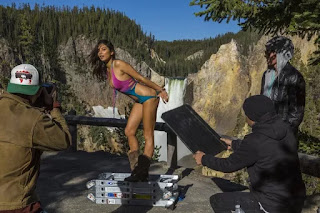 The National Park Service, already under fire for what Interior Secretary Sally Jewell has called a “culture” of sexual harassment, is being criticized for a Sports Illustrated swimsuit-model photo shoot at Yellowstone National Park, Lisa Rein reports for The Washington Post. One photo, which appeared in National Geographic in May, shows model Jessica Gomes twerking in front of the Grand Canyon of the Yellowstone. (National Geographic photo by Michael Nichols)

The photos "have angered park watchdogs, employees and advocates, who say the images undermine the effort to fight sexual misconduct," Rein writes. "The critics draw a line between sexual harassment and what they see as images that exploit women" Jeff Ruch, executive director of Public Employees for Environmental Responsiblity, told Rein, The Park Service “is dealing with sexual harassment and discrimination issues which are more difficult to address when seen through the prism of this shoot."

While the photos were not criticized when they first appeared last year, critics have made their voices heard since the "Interior Department inspector general’s office issued an explosive investigation in January documenting how multiple female employees at the Grand Canyon were repeatedly propositioned for sex and were targets of unwanted attention by male employees, some of whom were their supervisors," Rein writes. "Another investigation released in June found similar sexual misconduct at Canaveral National Seashore, in Florida."

Tom Crosson, the Park Service’s chief of public affairs, told Rein that the agency doesn't apply "a morals test when granting access to our parks for legal activities," and considers only factors such as the potential effects on the park and visitors.
Written by Tim Mandell Posted at 8/09/2016 11:08:00 AM