The 2014 Farm Bill's income limit for receiving federal farm benefits affects significantly fewer farms than the limit in the 2008 bill, which was small anyway, Ron Durst and Robert Williams report for Amber Waves, the magazine of the Economic Research Service of the U.S. Department of Agriculture. They estimate that about 7,000 farms would have been affected by the old limit while fewer than 2,500 are now. 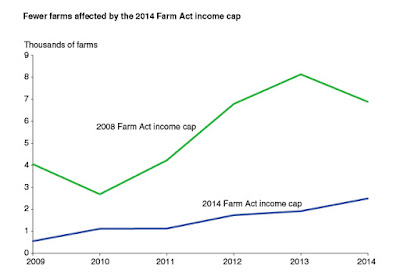 The 2008 bill abandoned a 2002 limit on adjusted gross income "while establishing separate limits on the farm and off-farm income components of AGI," Durst and Williams write. The 2014 bill, which replaced separate limits on farm and non-farm income "with a single total adjusted gross income of $900,000," also "returned to an eligibility cap that determined payment eligibility based on a single AGI limit, as in 2002 but without an exemption for those with a high share of AGI from farm income. The cap applies to most commodity and conservation programs and payments but does not apply to premium subsidies received by farmers participating in the crop insurance program." 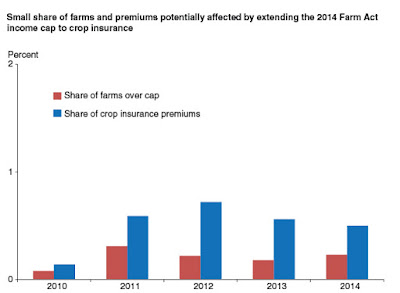 Federal income-tax data is not available "for farm partnerships, corporations, or limited liability companies," Durst and Williams write. "Published data from 2013, a year of record-high farm income and the most recent year for which such data are available, suggest that only about 0.7 percent of all farm sole proprietors and share rent landlords have AGI in excess of $1 million."

The 2008 bill "imposed three separate limits on the farm and nonfarm components of AGI — a $500,000 non-farm income cap, a $1 million cap affected eligibility for conservation payments, unless more than two-thirds of total average AGI was farm income" and "a person or legal entity with average AGI from farming that exceeded $750,000 was not eligible for direct payments," Durst and Williams write. Now, "Eligibility is determined on the basis of a 3-year average, and income on a joint return can be allocated as if a separate return had been filed." (Read more)
Written by Tim Mandell Posted at 8/11/2016 11:45:00 AM