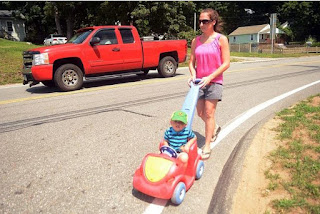 A lack of sidewalks in rural areas is not just a safety problem, but an obstacle to public health, by making walking for exercise a challenge. In Connecticut, 38 towns don't have sidewalks, according to a December 2015 survey, Jaclyn Diaz reports for the Norwich Bulletin. "While some of the towns reported having short sections of sidewalk, the majority of the municipalities do not have any, town officials said." (Bulletin photo by John Shishmanian: With no sidewalks in Bozrah, Conn. Amber Bochain has to walk her son in the street)

An official in Franlin, Conn., said there is no need sidewalks "because most residents drive to where they need to go," but there is concern among pedestrians, runners and walkers, Diaz reports. Amber Bochain, who has to walk in the street when she takes her son for walks in Bozrah, Conn., a town of 2,627, told Diaz, "We’re always yelling at drivers to slow down and some of them do. But it’s been a close call sometimes. The white line in the road is so small it isn’t big enough for the stroller to fit so I walk alongside it so it doesn’t get clipped.”

Sidewalks have been proposed in some towns where officials say there have been no accidents but they fear the potential of them, Diaz writes. Brooklyn, Conn., home to 8,244 residents, has begun to address its problem, adding "five miles of sidewalks, with 90 percent of them along state roads." A project that began today will add 900 feet of new sidewalk linking Walmart to the rest of U.S. 6.
Written by Tim Mandell Posted at 8/08/2016 12:21:00 PM