At least 640 oil-industry spills affected water in 2015; were any in or near your community?

Many spills of crude oil and drilling chemicals go largely unnoticed and sometimes unreported. It's up to local journalists to make sure the community is informed about the spills. Last year, there were 640 that affected groundwater or surface water in some way, Mike Soraghan and Pamela King reportsfor EnergyWire: About 2,500 spills have been reported since 2009, "but that is likely an undercount, as many oil and gas agencies don't track whether spills affect water. Some don't even track spills at the state level."

"Overall, there were at least 10,348 spills, blowouts and other mishaps at oil and gas sites last year, compared to 11,283 such events in 2014, according to EnergyWire analysis," Soraghan and King write. "In the 17 states where comparisons could be drawn, the occurrence of spills fell 8 percent between 2014 and 2015, after a rapid uptick the previous year." (EnergyWire map: spills by selected states 2012-15) 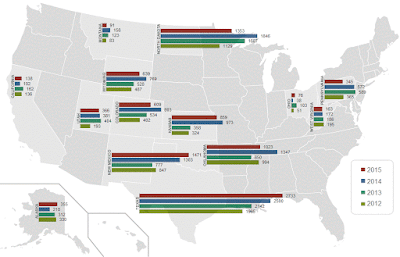 "The type of data collected, tracked and made public varies significantly from state to state," Soraghan and King write. "Oil and gas agencies in Alabama, Louisiana, Mississippi and Pennsylvania do not track spills at the state level. North Dakota and Utah don't specifically ask on spill forms whether the incident affected water, though North Dakota requests information about nearby water wells."

Desirée Plata, a Yale University chemical and environmental engineering professor who has studied oil spills, said "the lack of information is a shortcoming for both environmentalists and industry," Soraghan writes. "If the information were available, operators could show that they spill a small amount relative to the volume they produce and transport, she said." She told EnergyWire, "When there are surface spills, people try to do a good job but don't necessarily have all the information. That's true of industry also. It's an enormous challenge. Water spills can create more problems than land spills because the contaminants spread faster." (Read more)
Written by Tim Mandell Posted at 8/09/2016 12:31:00 PM