Loss of Wyoming's oil, gas and coal jobs leading to mass migration, along with unemployment benefits

The continued loss of coal and oil-and-gas jobs in Wyoming, the nation's least populated state, has led to increases in migration out of the state, and in unemployment claims from people who no longer live there. Laura Hancock reports for the Casper Star-Tribune.

"Nearly 25 percent of people claiming Wyoming unemployment benefits live in another state, according to data analyzed by the Department of Workforce Services’ Research and Planning section," Hancock reports.

Atlas Van Lines reported that in 2015 it moved 250 families out of Wyoming, and moved only 170 into the state, Hancock reports. Gary Stewart, whose Casper company is an agent for Atlas, said "that’s a reversal of the trend seen in recent years" when more families were moving into the state than out of it.

Many people who moved to Wyoming for jobs have returned home, Hancock writes. For instance, the number of unemployment claimants from Texas grew from 64 in May 2014 to 103 in May 2015, an increase of 64 percent. High rates of unemployment claims were also reported for people now living in Arizona, Colorado, Idaho, Montana and Utah. (Brookings Institution map) 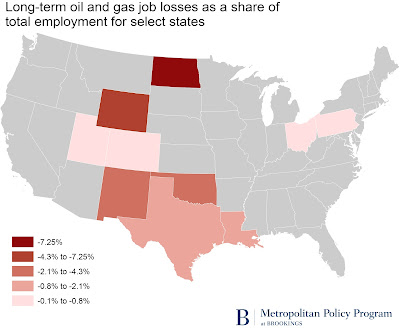