How much is a dollar really worth in your state? The federal Bureau of Economic Analysis creates something called Regional Price Parities, which measures price fluctuations across states and metropolitan areas, Niraj Chokshi reports for The New York Times. BEA in July released a report showing the real purchasing power of money in each state.

"Imagine a store offering a range of goods and services, each for sale at the national-average price for that particular item," Chokshi writes. "Now, imagine a shopping cart filled with $100 worth of items from that store. In Hawaii, $100 buys about 85 percent of the goods in the cart thanks to the high prices there. In other words, $100 in Hawaii feels more like $85.60, compared to the national average. In Mississippi, the opposite is true. With $100, you would be able to buy the cart’s contents and more: the equivalent of $115.30 of goods and services from the national-average store." 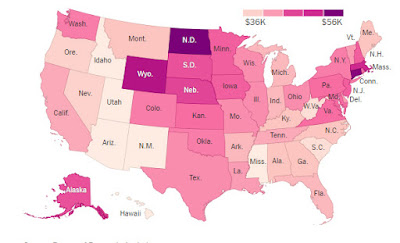