Rural electric co-ops getting into broadband 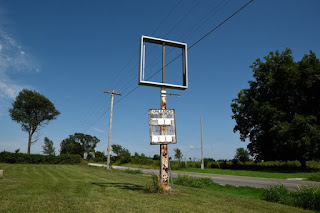 Rural electric cooperatives are bringing internet to under-served areas by taking a page out of the New Deal program that brought electricity and other infrastructure to rural America, Cecillia Kang reports for The New York Times. High-speed internet is finally reaching places like Zena, Okla., but through local power companies, not the telecom and cable companies that have wired most of urban America. (NYT photo by Nick Oxford: Fiber optic cable running above a former gas station outside Zena)

"In some cases, rural municipalities are also using electrification laws from the early 1900s to obtain funds and regulatory permissions reserved for utilities, in order to offer broadband," Kang writes. About 40 electric cooperatives nationwide "offer or are in the process of building networks to provide high-speed internet service, compared with just one in 2010, according to the Institute for Local Self-Reliance, a nonprofit focused on community broadband networks."

"The parallels between bringing electricity and bringing broadband to rural areas run deep," Kang writes, giving her largely urban audience a history lesson most ruralites know: "In the 1930s, about 90 percent of urban residents in the U.S. had access to power, compared to just 10 percent in rural areas, according to the New Deal Network research group. At the time, President Roosevelt warned that the electricity divide excluded farm families from economic benefits provided by power. But private power companies said that it was too expensive to electrify rural areas and that even if they did, there was little profit to be made. So President Roosevelt established the Rural Electrification Administration in 1936, a centerpiece of the New Deal, which led to the creation of thousands of small electric cooperatives using federal funds."

"With high-speed internet, there are similar dynamics," Kang reports. "Last year, the federal government declared that broadband should be treated like a utility, as essential as electricity or the phone. That spurred a new urgency to get fast internet service to remote areas, to help close the digital gap with cities. The Federal Communications Commission, which in 2014 began giving experimental broadband grants to alternative carriers like electric companies, recently proposed $2 billion in such grants over the next decade to new broadband providers such as power cooperatives."
Written by Tim Mandell Posted at 8/08/2016 12:19:00 PM