The 116-mile Coalfields Expressway, also known as U.S. Route 121, is being built in southwestern Virginia and West Virginia as a way to help bring economic development to distressed coal country in the Appalachian region. But construction has ground to a halt, amid a call by the Federal Highway Administration for an environmental review on a 26-mile section that was re-routed—some say—to benefit coal companies instead of the local communities the road was intended to serve, Steve Szkotak reports for The Associated Press. The review could take up to 18 months. (Virginia Department of Transportation map) 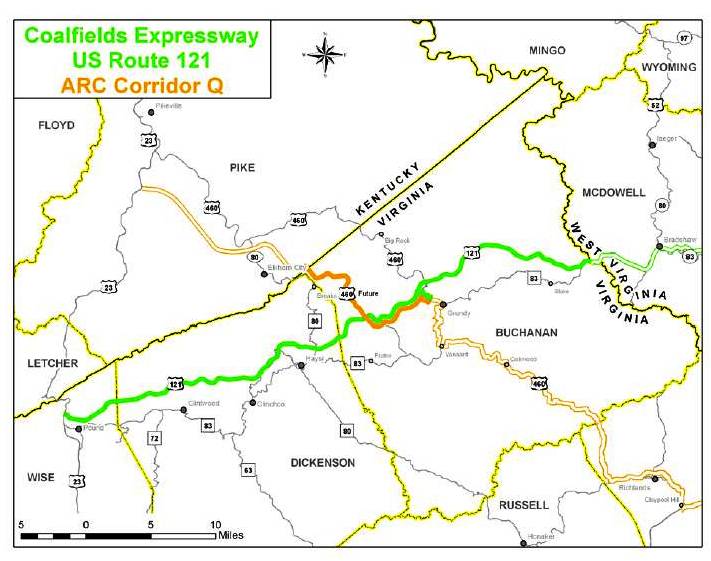 State officials in Virginia maintain "that the shift reflects a public-private partnership that trims billions from the cost of the highway," Szkotak writes. But critics say the new route takes the road to untapped coal reserves. Deborah Murray of the Southern Environmental Law Center said of the rerouted section, "We hope that once the alternatives are fully considered, as well as the original purpose of the road project itself, a different choice will be made."

Jane Branham of Southern Appalachia Stewards "said economically depressed coal communities 'desperately need' a link to new economic opportunities," Szkotak writes. "The region suffers, she said, from a lack of public transportation." Branham told Szkotak, "We're not against a road. But I think it's designed to benefit coal and not the communities. We have nothing compared to Richmond and other places. We want that money to come here." (Read more)
Written by Tim Mandell Posted at 7/30/2014 11:58:00 AM