"The battle for America's poorest consumers intensified Monday with Dollar Tree's agreement to buy rival Family Dollar Stores for about $8.5 billion," Paul Ziobro and Shelly Banjo report for The Wall Street Journal. "The chains thrived during the recession as the number of working Americans living in poverty increased by nearly 40 percent, according to the U.S. Bureau of Labor Statistics." The two chains operate more than 13,000 stores nationwide. 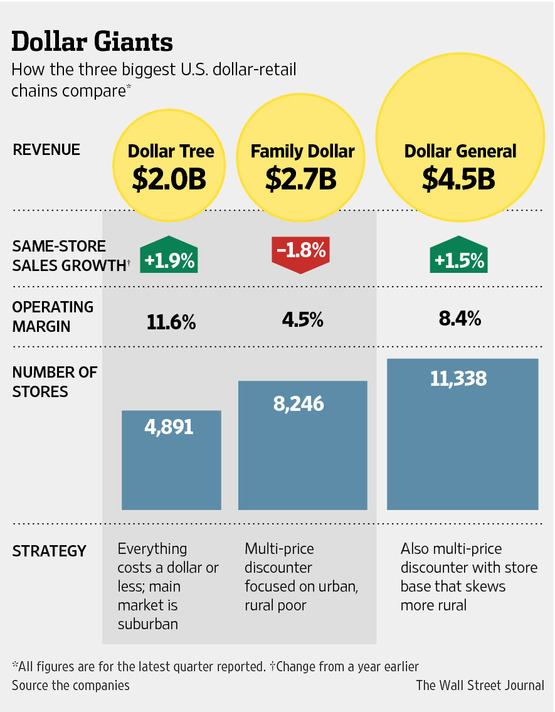 Dollar stores are staples in many rural areas, but while they all might appear to sell similar items, Dollar Tree and Family Dollars are vastly different franchises, the Journal writes. "Dollar Tree sells goods like picture frames and school supplies for a dollar or less and focuses on suburban markets. Family Dollar sells more branded consumer products like Tide detergent and Coca-Cola at a range of discounted prices and targets the urban and rural poor." (Journal graphic)

"Executives said they don't plan to close stores but may turn some Family Dollar stores into Dollar Trees, or vice versa, where the existing stores are underperforming," The Journal writes. "Dollar stores have been expanding rapidly even as other segments of the industry scale back. The three top dollar-store chains (Dollar Tree, Family Dollar and Dollar General) have together added nearly 10,000 stores over the past decade. They now operate a combined 24,000 locations and have projected adding at least another 1,000 stores this year." (Read more)
Written by Tim Mandell Posted at 7/30/2014 11:59:00 AM