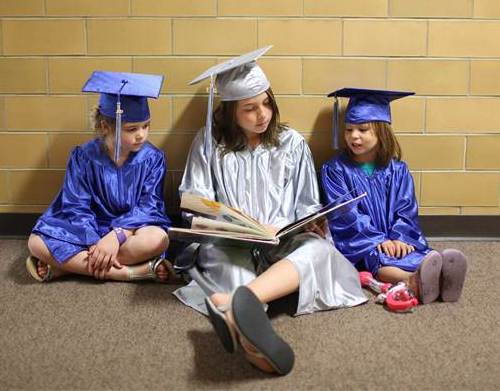 "In the past few decades, rural school districts, especially those in the Midwest, Southwest and Deep South, have been folding their smaller schools into bigger ones, which are often many miles away," Nona Willis Aronowitz reports for NBC News. "These schools close because of shrinking state funding, low enrollment or simply a desire for efficiency—even as studies show small schools often have higher test scores, higher graduation rates and better student participation in extracurriculars." (NBC photo by Ackerman Gruber: Students celebrate graduating from elementary school in Cyprus, Minn. in 2013. The school closed that year because of low enrollment.)

"Experts say that closing these schools can be counter-productive not just for the students but for the entire population," Aronowitz writes. "Not only does the town fail to attract young families, who would rather live near a school, it often loses one of its main hubs of activity and community interaction."  Brian Depew, executive director of the Center for Rural Affairs told Aronowitz, “You’re yanking a key community structure out of these towns. They’re places of education, but they also serve this larger civic function."

Some parents worry about travel, Aronowitz writes. "In consolidated rural districts, children often endure excruciatingly long rides to school. In places like the Dakotas and Nebraska, the routes may take hours. The bus rides in Monticello, Maine, can already stretch the length of a class period, and parents are worried it’ll take even longer." Sarah Quirk, parent of a child in Wellington, Maine, told Aronowitz, “That’s too much time for a young kid. If it’s longer than 45 minutes, I’ll have to drive [my children] in, but I know not every parent can do that. That’s a lot of gas money.”

While budget concerns are one reason leading to closures and consolidation, another is the idea that bigger is better, Aronowitz writes. Depew told her, “Our go-to answer as a society is consolidation. Because it’s happened so many times, leaders just think, ‘That’s just what we have to do’ . . . it’s a capitalist drive for efficiency.” He said eventually "a string of consolidations lead to a self-fulfilling prophecy: a school closes, a town’s population declines and the cycle starts all over again."

Barb Hesse, a researcher at the University of Minnesota-Morris’s Center for Small Towns, is a lifelong resident of Cyrus, Minn., where there were 25 people in her graduating class, Aronowitz writes. The high school has since closed, and the elementary school recently followed suit because of low enrollment. "Hesse said that although the town is still 'alive and kicking,' it does feel like it’s been dealt another blow, leaving its residents nostalgic for 'the way it used to be.'" (Read more)
Written by Tim Mandell Posted at 7/30/2014 11:59:00 AM

We were looking for the peace and affordability of a rural home but did not want to live so far from a school that our kids would be on a bus for an hour or longer, depending on the weather. That is just too long a period of time for a child to spend commuting.