Iowa editor, fired in May for anti-gay post on his personal blog, is suing for religious discrimination 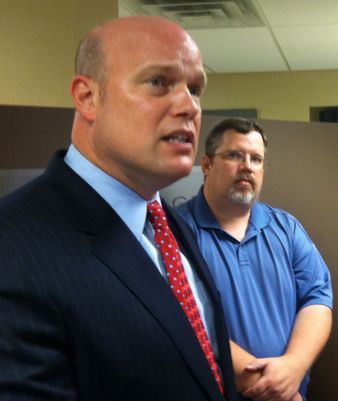 UPDATE: Feb. 2, 2015: Bob Eschliman has started a new publication called The Iowa Statesman, which plans "to cover all levels of government and politics through a combination of on-staff mobile journalists and strategically placed writers who will provide crowdsourcing coverage," says the outlet's website. "We will make strategic partnerships along the way with other national media outlets that will expand our reach, and provide the rest of the nation with a better look at the first-in-the-nation caucus state." The outlet, which was seeking donations for funding, only received $4,656 of its $100,000 goal.

The editor of a community newspaper in Iowa who was fired in May for making disparaging remarks on his personal blog about religion, homosexuality and the lesbian, gay, bisexual and transgender community is suing his former employer for religious discrimination, Daniel Finney and William Petroski report for The Des Moines Register. (Petroski photo: Fired editor Bob Eschliman, right, with attorney Matt Whittaker)

Bob Eschliman was fired from the Newton Daily News after writing on his blog: "I’d like to talk a little bit about deceivers among us, most notably the LGBTQXYZ crowd and the Gaystapo effort to reword the Bible to make their sinful nature 'right with God'." Eschliman was referring to a book called the Queen James Bible, which "seeks to resolve interpretive ambiguity in the Bible as it pertains to homosexuality" by editing eight verses in a way that makes homophobic interpretations impossible, according to the site.

Eschliman filed a complaint last week with the U.S. Equal Employment Opportunity Commission office in Milwaukee arguing that he was terminated because of his religious beliefs, Finney and Petroski write. "If the dispute isn't resolved to Eschliman's satisfaction, he could sue in federal court to seek financial damages."

Eschliman said he "has had difficulty finding employment since his dismissal, 'particularly here in Iowa'," the Register reports. "He said his writing, which some considered objectionable, was posted on a personal blog that was read mainly by family members and friends." John Rung, president of Shaw Media, which owns the Daily News, disagreed, writing in May: "While he is entitled to his opinion, his public airing of it compromised the reputation of this newspaper and his ability to lead it."

But Mark Kende, a constitutional law professor at Drake University, said Eschliman has a potential case, Finney and Petroski write. Kende told the Register, "I am not saying the newspaper does not have an attempted defense, but federal laws generally prohibit discrimination on the basis of religion. (Eschliman) is arguing that they are firing him for his religious beliefs, and to the extent that the comments he made are based on his religion, that doesn't seem frivolous. But having said that, if I were the company, I would say that we are not firing him for his religious beliefs. We are firing him because his job is to be an impartial reporter, and as an impartial reporter he has lost his credibility, so it has nothing to do with his religion." (Read more)
Written by Tim Mandell Posted at 7/28/2014 09:05:00 AM