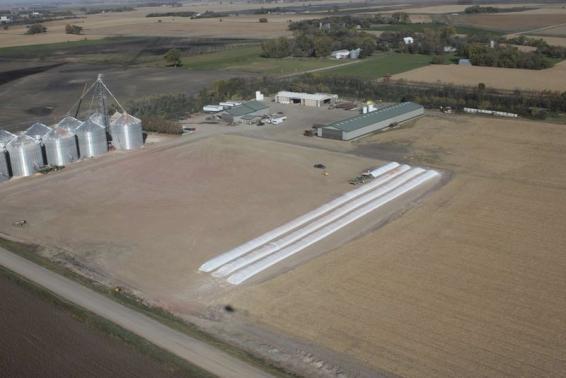 Giant, sausage-shaped white bags are turning up on grain farms across the Midwest. With rail delays causing farmers to store crops longer, and prices declining, the football field-sized polyethylene containers "allow farmers to store millions of bushels of corn and soybeans at a fraction the cost of conventional silos and far more efficiently than leaving grain in the open air," Karl Plume reports for Reuters. They could also help them delay sales until prices improve. (Reuters photo)

"With many bins still overflowing with last year's crop in the world's top grain grower, farmers are snapping up these systems as a practical necessity ahead of bumper harvests, and as a safeguard against another winter of railroad delays," Plume writes. "They may also be a sign that farmers will not be rushed into dumping their harvests quickly. Prices for corn to be harvested in autumn have tumbled as much as 18 percent so far this year, leaving growers hoping for a rebound."

"The systems also represent the latest front in an ongoing power struggle in the rural heartland between farmers, who want more say in how and when their crops are sold, and merchants such as Archer Daniels Midland and Bunge Ltd., who control the main arteries of trade," Plume writes.

The bags are cheaper and keep crops in better condition than tarpaulins, Plume writes. "The white outside reflects the sun's heat while the inner layer is black, acting as a barrier to sunlight and helping maintain a lower-than-ambient temperature inside. The cost of storage in a single-use bag is around 5 to 7 cents per bushel, plus charges for loading and unloading equipment, which together can come to anywhere between $60,000 and $160,000." (Read more)
Written by Tim Mandell Posted at 7/29/2014 12:36:00 PM