South growing; by 2060 a 'connected megalopolis would stretch from Raleigh all the way to Atlanta' The South is rising — in population. What that means is that much of the Southeast, which has the nation's highest percentage of rural population, is slowly being urbanized, according to a study published in PLOS One. About 77 million people live in the South and "the region's rate of population growth over the last six decades has been about 40 percent greater than the rest of the country," Emily Badger reports for The Washington Post. (PLOS One map: Urban land cover in 2009)

"Development there looks notably different from urbanized parts of the Northeast," Badger writes. "Southern cities and their suburbs tend to be lower-density and car-dependent, with more large-lot, single-family homes. Communities often leap-frog across the countryside, creating a kind of patchwork development that consumes a lot of land." 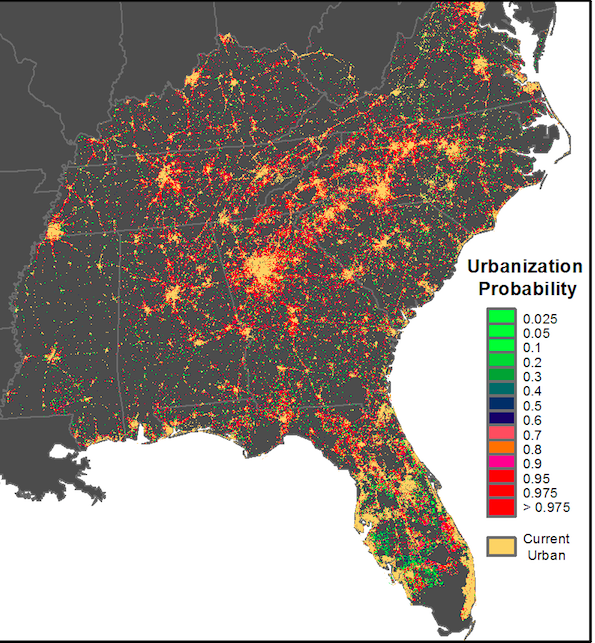 "This recent history raises some unsettling questions for conservationists and urban planners about the future: If some of the fastest-growing parts of the country are also among the most sprawling, what will the Southeast look like a few decades from now? And what will that future mean for natural habitats, climate change and the people who live there?" Badger writes. The result, by 2060 "a completely connected megalopolis would stretch from Raleigh all the way to Atlanta." (Read more) (PLOS One map: Projected urban land cover in 2060; researchers include in South areas south of Interstate 64 and west of Interstate 77 in West Virginia, which is sometimes classified as a Southern state but most often not)
Written by Tim Mandell Posted at 7/31/2014 03:23:00 PM