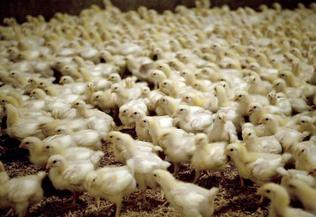 The U.S. Department of Agriculture, which has been criticized for having a flawed poultry inspection policy, "unveiled on Thursday the first major overhaul of the nation's poultry inspection system in more than 50 years," Kelsey Gee and Jesse Newman report for The Wall Street Journal. USDA "said the new system was part of an effort to better fight pathogens while placing more responsibility and trust on companies to protect the quality of their chicken and turkey." (Chicago Tribune photo by E. Jason Wambsgans)

The new inspection system, which goes into effect immediately, "shifts much of the onus for visually inspecting and sorting carcasses and bird parts from the government to plant employees," the Journal writes. "The rules would reduce the number of USDA employees on evisceration lines — where workers or machines remove the internal organs of chickens and turkeys — to one from what is currently as many as four."

Under the new system, inspectors will have more time to ensure that employees are taking efforts to prevent contamination by pathogens such as salmonella and campylobacter, the Journal writes. That move will  prevent nearly 5,000 food-borne illnesses a year, Agriculture Secretary Tom Vilsack told reporters. He said, "We know a lot more about what makes food unsafe than we did in 1957 and we are confident that this rule, with the additional sampling and testing, will result in safer food." (Read more)

While the new rules cap the speed of processing lines at 140 birds per minute, instead of the 175 the industry wanted, there is still concern that lines will move too fast for proper inspections, Lindsay Wise reports for McClatchy Newspapers. Wenonah Hauter, the executive director of the nonprofit Food & Water Watch, said the “one USDA inspector left on the slaughter line under this new rule will still have to inspect 2.33 birds every second, an impossible task that leaves consumers at risk." Hauter "added that the new regulations effectively privatize the poultry inspection process by allowing companies to police themselves." (Read more)
Written by Tim Mandell Posted at 8/01/2014 01:09:00 PM