A pesticide linked to honeybee deaths has been found in nine Midwestern rivers, Josephine Marcotty reports for the Star Tribune in Minneapolis. Neonicotinoids, blamed for wiping out 40 to 50 percent of honeybees, were found to be universally present during the growing season in every state and watershed that scientists from the U.S. Geological Survey studied. Honeybees pollinate about 90 crops worldwide.

The results of the study, published in Environmental Pollution, "found levels of neonicotinoid insecticides at up to 20 times the concentrations deemed toxic to aquatic organisms," reports the Summit County Citizens Voice in Frisco, Calif. Traces of the chemicals were found in the Mississippi and Missouri rivers. "The rivers studied drain most of Iowa, and parts of Minnesota, Montana, Nebraska, North Dakota, South Dakota, and Wisconsin. These states have the highest use of neonicotinoid insecticides in the nation, and the chemicals were found in all nine rivers and streams." (USGC map: where studies were conducted) 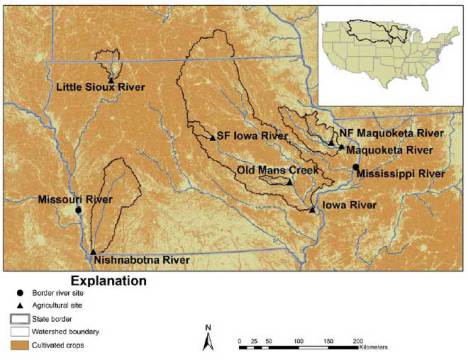 The USGS study "is the first to measure how widely the toxins have spread through surface waters," Marcotty writes. "The researchers took monthly measurements at eight sites from spring through fall in 2013. They looked at small watersheds such as the Little Sioux . . . and the huge watersheds of the Missouri and Mississippi rivers. At a ninth site, a tiny watershed in Iowa surrounded by agricultural fields, they took more frequent measurements to track how the pollutant levels changed during the season and with rain."

Kathryn Kuivila, a scientist at the USGS Oregon Water Science Center in Portland, Ore., and the study's lead author, said it was not clear what impact the pesticides have in aquatic ecosystems, Marcotty writes. "Levels considered toxic by the EPA are many times higher than those found in the USGS samples. But Kuivila said that other studies have found that toxicity can be much lower for some species, and others have found that the number of tiny worms and other soil insects drops precipitously at very low concentrations." (Read more)
Written by Tim Mandell Posted at 7/28/2014 12:47:00 PM