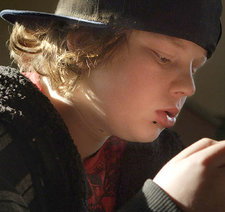 "Rich Hill," a new documentary that won the U.S. Grand Jury Prize at the Sundance Film Festival, opens in limited release today and focuses on three boys growing up in the film title's impoverished Missouri town. "But rather than attempt an elegy for the town, a former coal producer, or an essay on poverty, the pair (filmmakers Tracy Droz Tragos and Andrew Droz Palermozero) zero in on three teenagers from struggling homes," Nicolas Rapold writes in a review for The New York Times. "The result, shot over a year and a half, is an intimately observant look at individual children and the details of their daily lives and personalities." (Orchard photo: Still from the movie)

The parents of Andrew, Appachey and Harley "are veterans of a rural war of attrition, from Andrew’s heavily medicated mother to Appachey’s, a mountain of a woman who delivers a heartbreakingly tough soliloquy," Rapold writes. "They are at the cusp of adolescence, starting to push back at low-rent surroundings, but still childlike. Harley trudges around, keeping up a running quirky commentary about his temper or his beloved mom, who’s in prison for tragic reasons that emerge later. Andrew is mysteriously beatific, the son of a free spirit who covers Hank Williams songs and keeps moving the family around. Less clearly drawn, Appachey has an abiding rage but, in sixth grade, none of its dignity."

The movie, set in a town with a population of 1,396, "exists mainly as an act of social advocacy, showing how one portion of the population lives and offering a sobering rebuke to pull-yourself-up-by-your-bootstraps rhetoric," A.A. Dowd writes in a review for A.V. Club. The movie "also provides the strikingly symbolic image of a ferris wheel in motion. This is a movie, the ride reminds, about constantly moving but never getting anywhere new." (Read more) (Best Places map)
Written by Tim Mandell Posted at 8/01/2014 12:03:00 PM