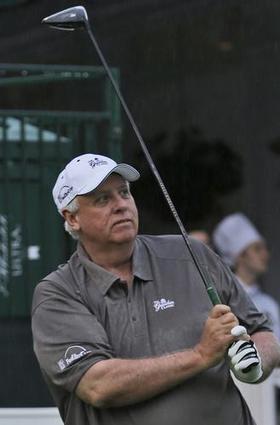 The billionaire owner of coal mines in Kentucky, Tennessee, West Virginia, Virginia and Alabama is facing at least 266 pending coal mining violations, including 129 in Kentucky, a state where he has contributed $400,000 to Gov. Steve Beshear's political causes since early 2011, Tom Loftus and Jim Bruggers report for The Courier-Journal in Louisville. (Forbes photo: Jim Justice)

Alleged violations in Kentucky against Jim Justice, owner of The Greenbrier resort in West Virginia, "include failing to submit water monitoring reports, failing to live up to promises after previous enforcement actions, failing to pay fines and failing to meet requirements for reclaiming mined land, including eliminating highwalls," Loftus and Bruggers write. "Civil penalties owed by Justice companies in Kentucky increased to $2 million from $1.6 million between April and June."

Natural Resources Commissioner Steve Hohmann informed Justice that five of his companies in Eastern Kentucky would be stopped form mining, effective June 30, but the suspensions were suspended until Aug. 11, with no reason given publicly for the decision, Loftus and Bruggers write.

"Besides the contributions, Beshear was among the dignitaries Justice invited to help cut the ribbon at the 2010 opening of the casino at The Greenbrier," Loftus and Bruggers write. "And, at Justice's invitation, Beshear played in the pro-am golf event at The Greenbrier Classic in 2012 and 2013." (Read more)
Written by Tim Mandell Posted at 7/31/2014 10:56:00 AM