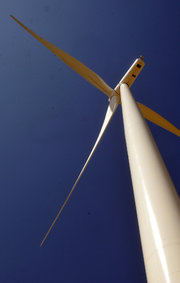 Scientists in Texas have developed a better way to turn strong panhandle winds into energy, a move that could help states meet federally mandated rules to reduce carbon emissions, Matthew Wald reports for The New York Times. The result is wind farms that use 30-ton blades atop 260-foot towers that produce 40 percent more energy than the average turbine. (Times photo by David Bowser: Wind farm in Texas)

"This year, a sprawling network of new high-voltage power lines was completed, tying the panhandle area and West Texas to the millions of customers around Dallas-Fort Worth, Austin and Houston," Wald writes. "By any standard, the scale is enormous. Anywhere else, a big transmission project is a few hundred miles long and costs a few hundred million dollars; this is a network of 3,600 miles built at a cost of $7 billion, which is more money than the whole country has spent on transmission in some recent years. It comes to about $300 per person served by the Texas grid."


"Nationally, transmission infrastructure is built only when circumstances demand it; in Texas, however, lawmakers have ordered an 'if-you-build-it, they-will-come' approach," Wald writes. "And it is working."

"The new lines are meant to handle up to 18,000 megawatts — millions of households," Wald writes. "While there are still problems — the wind generally does not blow strongly on the hottest days, when its power generation is needed most, for example — scientists say that the supply will become somewhat more stable as more transmission lines, and more wind farms, are built in diverse locations."

But the project has its share of critics, especially since the $7 billion is being charged to taxpayers, Wald writes. But that only amounts to an extra $6 per month in utilities, and supporters say the move has cut monthly costs by more than that much.

While the project is considered a success, some people wonder if it can be duplicated in other states, Wald writes. "Texas is one of only three states (along with California and New York) with borders roughly contiguous with a grid operator, putting its electric system under the control of a single legislature and a single public utilities commission, and it is by far the largest in that category. Anywhere else, every state on the route must agree on how the transmission costs will be shared, and a consensus established among the generators and the utilities." (Read more)
Written by Tim Mandell Posted at 7/29/2014 04:09:00 PM