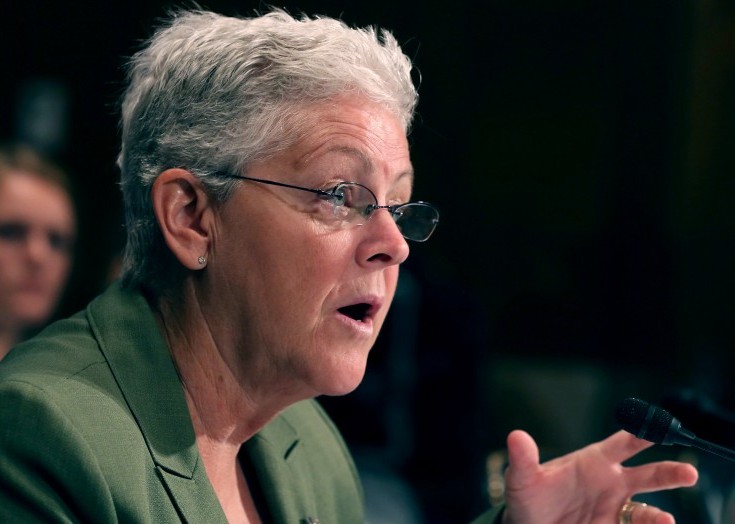 Environmental Protection Agency head Gina McCarthy is on quest to promote, clarify and answer questions about proposed water rules to simplify federal water laws, a move that has not gone over well with many farmers, who believe the rules will expand EPA's jurisdiction. McCarthy was in Missouri earlier this month to explain and defend the rules, but she continues to meet resistance. The EPA chief has had a habit of rubbing rural folks the wrong way and didn't help her cause by inadvertently offending people with recent comments. (Getty Images by Mark Wilson)

The trip to Missouri didn't go as planned, with the farm federation responding "by sending Congress a document 'decoding' point-by-point an EPA blog post that attempted to explain the rule," Jerry Hagstrom reports for National Journal. "The Republican senators she met with issued a series of news releases saying they appreciated her visit but EPA should still withdraw the rule."

"In the meantime, McCarthy could work a bit on her own communication skills in rural America," Hagstrom writes. "EPA administrators tend not to come from the heartland, and McCarthy is no exception. A Boston native, McCarthy speaks with a strong New England accent, and she seems not to suffer fools gladly." And she isn't winning over any rural farmers by calling their concerns about the rules "silly" and "ludicrous," words she said were taken out of context.

"McCarthy does have her rural defenders," Hagstrom writes. "The Theodore Roosevelt Conservation Partnership, which includes a wide range of hunting and fishing groups, has said Congress should not interfere with the comment process and that fish, wildlife and people all need clean water. The rule can be written so that 'farmers and ranchers can farm the way they have and we can protect the waters,' McCarthy said."

"The battle can be summed up in one word: ditches. Farmers and ranchers say EPA wants to regulate all their ditches that may fill up with water at some point during the year," Hagstrom writes. "But rural America will have to accept the fact that some ditches will be regulated." McCarthy told Hagstrom, "We are talking about ditches that used to be streams and still act like streams. They may not have water running but still act as a stream. I never expected to say the word 'ditch' this many times in my entire life, and I hope to get away from that as soon as possible." (Read more)
Written by Tim Mandell Posted at 7/30/2014 11:59:00 AM